Seattle Sounders manager Brian Schmetzer says that there were some positives from the goalless draw with San Jose Earthquakes.Schmetzer’s team were coming on the back of a 3-1 loss against Los Angeles FC. As a result, there was a greater need for three points to keep the momentum at the start of the campaign. The MLS campaign is coming to a crucial juncture with Seattle Sounders sitting at the top of the table with 31 points. However, the lead could have been much greater if not for the recent dropped points against LAFC and San Jose. Schmetzer, though, is not too concerned about the dropped points against San Jose since there were positives from the game. 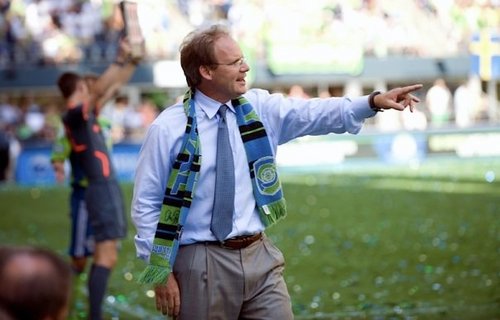 This was a game which was expected to feature a lot of goals going by the result of last season. Seattle Sounders were able to secure an impressive 7-1 victory in the same fixture last season. This time around, the two teams were evenly matched throughout the game. San Jose could have even taken a lead in the game if not for Will Bruin clearing an effort from Chris Wondolowski. Even though San Jose were able to get a slender advantage in the first half, they were not able to this advantage in two goals. Seattle had a late opportunity to win the game with Jordan Morris coming close in the last 10 minutes.

“Yeah. I mean they’re – believe it or not there are some positives here. This is always a tricky place to play. I think San Jose has been one of our bogey teams for many years and certainly now with the unorthodox style, the field condition the way it is. You know, their desire to have a little redemption, revenge, whatever you want to call it, for the 7-1 loss – we knew it was going to be a hard game. But we kept a clean sheet, so that’s a positive,” said Schmetzer.